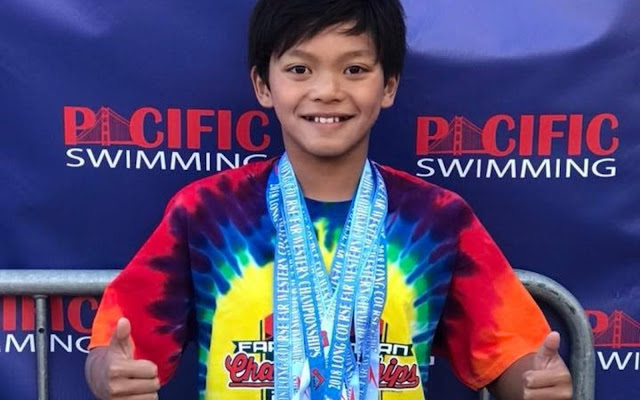 10-year old Swimmer Clark Kent Apuada broke a 23-year old record when he finished the 100-meter butterfly a second earlier than the previous record set by an Olympian. Apuada swam a time of 1:09:38 at the Far Western Long Course Championship in California.

Olympic Gold medalist Michael Phelps previously holds the record for the fastest time with 1:10:48 back in 1995. The 23-year old record has remained untouched up until just this Sunday.

The Filipino-American Apuada is only in his fifth grade but it has not stopped him on setting sights on bigger things. He started swimming at the age of 7 and since then, he was already pushing himself to one day break Phelps' record.

When asked to talk about his win, Apuada said that he was motivated. "I was so happy and relieved that I was able to beat the record" he added.

His friends call him "Superman" as he shares the same name as the famous superhero. He now has a reason to live up to it with his recent accomplishment.

Is the Olympics next?

Apuada isn't basking in his recent accolade that much. He said that he has set his sights on a bigger goal which is the Olympics.

Phelps first represented his country at the Olympics at the young age of 15. He then went on to win a total of 28 medals overall, which makes him the most decorated competitor in the history of the games.

Apuada is eyeing for Paris in 2024 or Los Angeles in 2028. He said that his recent accomplishment has motivated him to continue and do everything to bring him to an elite level.

Shall he stay at the same pace that he is going right now, more records may soon be broken.

Are we seeing the next big thing in Swimming? Who likes to see more records broken? Leave a comment and follow Sport Nuz for more updates.
Michael Phelps Olympics Swimming Swimming News